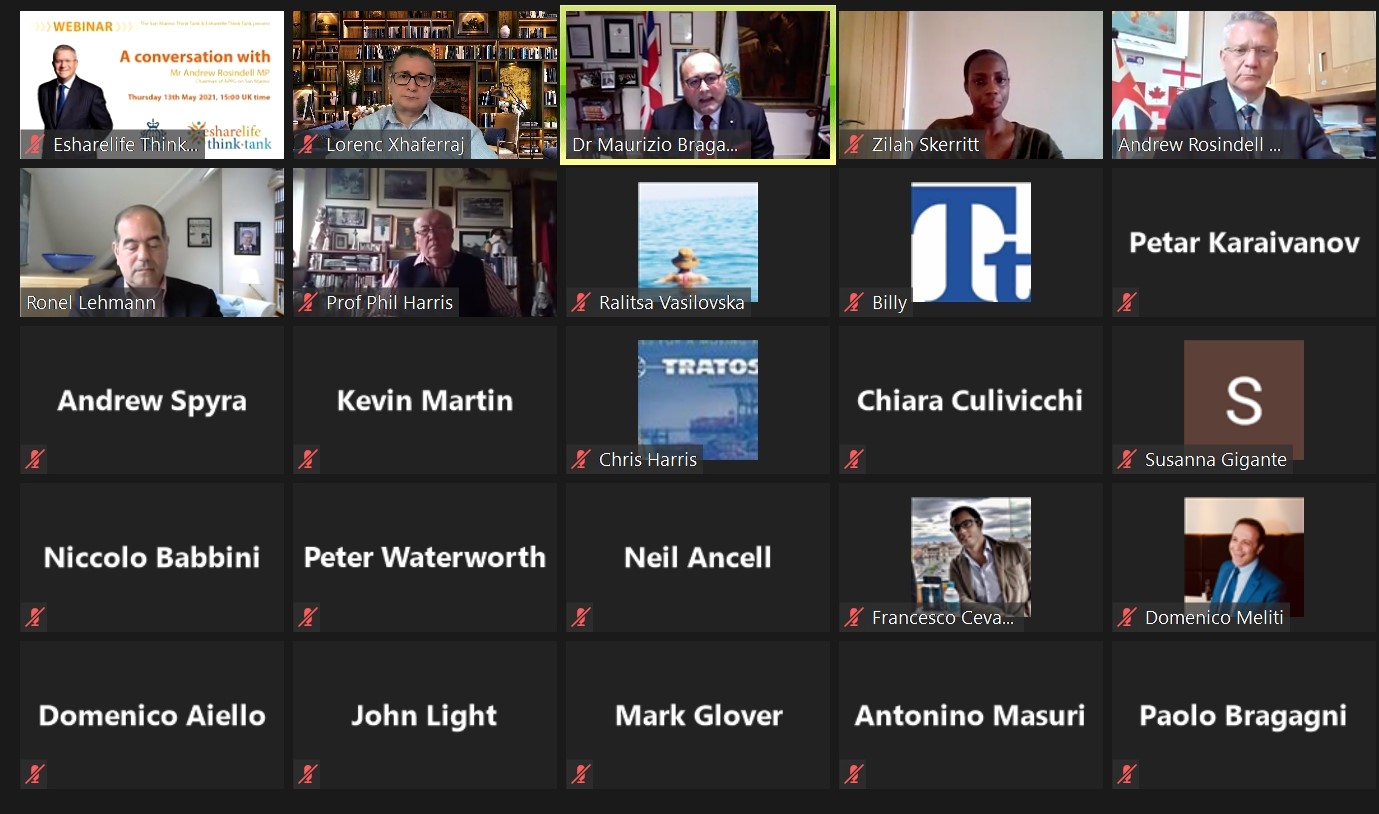 On 13th May 2021 Esharelife Think Tank in close collaboration with San Marino Think Tank organised a webinar with Andrew Rosindell MP, who led a conversation on the challenges of promoting democracy and its value in our contemporary world.

Mr Andrew Rosindell is a British Member of Parliament and has been for almost 20 years now. He is also the Chairman of San Marino APPG at the UK Parliament, through which he actively promotes a strong collaboration between the United Kingdom and San Marino.

Mr Rosindell began his speech with a very powerful statement, claiming that no matter what political view or political party you come from, democracy and freedom are what politicians are there to defend. He recalled the numerous times, since the Magna Carta, in which the British people’s rights have been threatened, and expressed the strong passion which led the British people to live in a society where they are now free to live their lives with minimal government interference.

He then talked about his belief in the nation state and, at the same time, in local identity. Mr Rosindell represents a constituency to the East of England, and advocates for a better understanding of small realities. Throughout the webinar, he constantly repeated the importance of knowing where we come from and fully understanding our national identity, for it is the only way we can grasp the real meaning of democracy, that is, the right to share in power and to not be overstepped by others opinion.

In fact, democracy has to be a consensus. He argued that, for example, if a forming nation of the UK democratically decides to leave the UK because they feel no longer represented by it, then we have to uphold democracy and respect their decision.

Mr Rosindell also stressed the idea that democracy must be underpinned by a rule of law or a constitution. In the case of the UK, the flexible constitution allows democracy to evolve whilst still strongly relying on its past and tradition.

Dr Bragagni, moderator of the webinar, proceeded to talk about the importance for democracy of accountability. Mr Rosindell expanded on this topic, saying that if a politician is not accountable to their constituents or their people, then democracy is diminished. There must be a direct link between a politician and the people, which is the reason why Mr Rosindell does not believe in proportional representation, for it makes the politician “live in an ivory tower”, isolated and distant from the voters.

Finally, a lively Q & A took place, where several participants asked their questions. Mr Rosindell discussed the role of democracy in achieving environmental sustainability, stating that the governments have a duty to take the lead in tackling climate change. He also explained how the pandemic has brought a reduction in pollution and a greater consideration for environmental protection. He then expressed his shock over the tragic situation in the Middle East and insisted on the need for a strong and true democracy to ensure peace in the region. He emphasised that all around the world, our priority must be to support countries that, unlike the UK, have not had the fortune of having the long-standing freedoms and liberties entailed with democracy. He then proceeded with a reflection upon democracies’ approach to the pandemic, which has been strongly criticised, and explained that these unprecedented times required governments to exercise their authority to protect their people. He concluded by claiming the importance and necessity of teaching democratic values in school and the rich history of democracy in the UK.

Although this was a free event, if you would like to make a small donation to help the children in Kenya supported by Esharelife Foundation, please visit esharelife.org or virgin money giving.