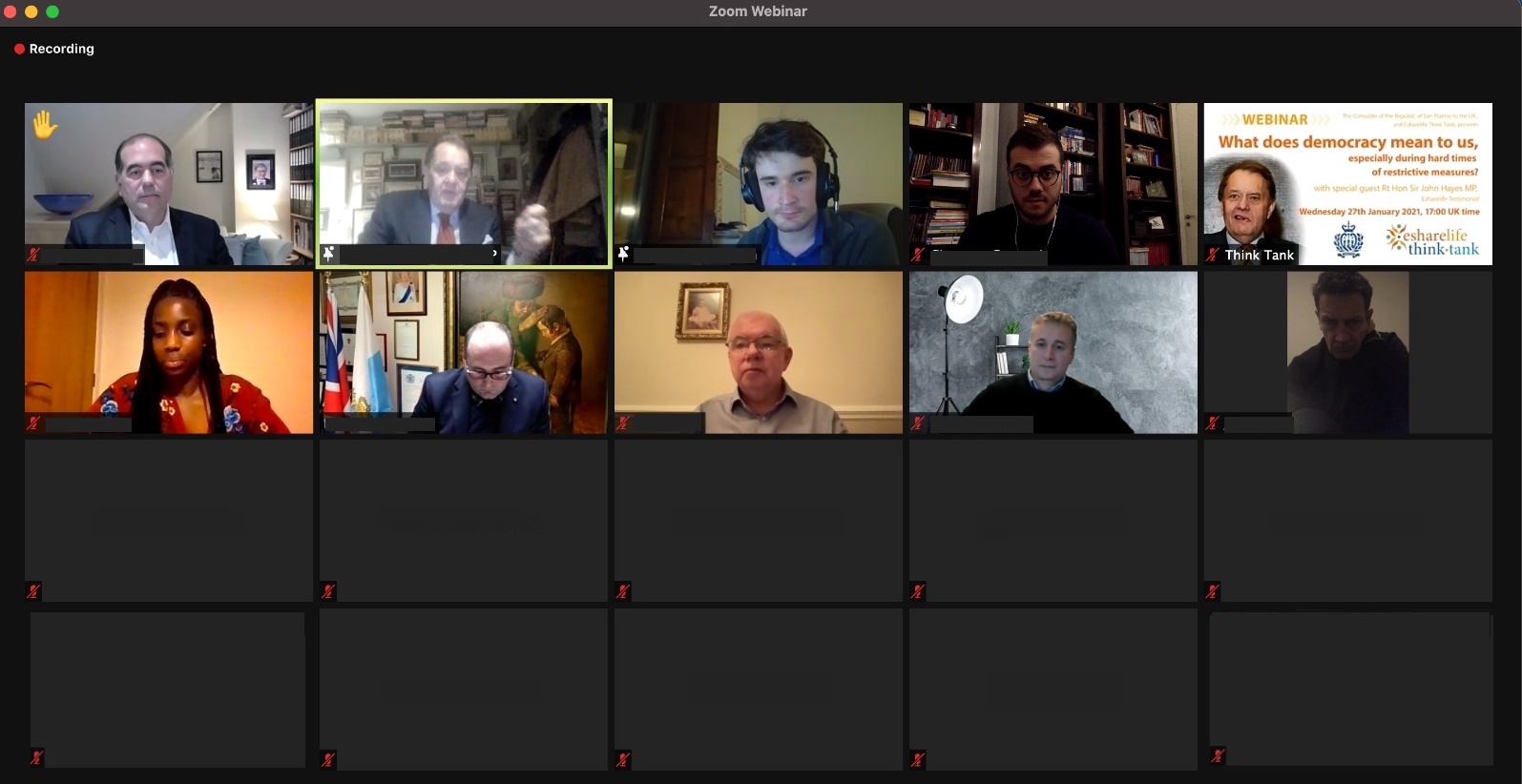 Esharelife Think Tank in close cooperation with Honorary Consulate of San Marino in the UK, co-hosted on 27 January 2021 an online webinar entitled “What does democracy mean to us, especially during the hard times of restrictive measures?”

The Rt Hon Sir John Hayes MP, who served in many ministerial positions for the UK governments during his long political career, participated as Keynote Speaker of the event. The Honorary Consul, Dr Maurizio Bragagni, who moderated the event, welcomed Sir Hayes and several guests who joined the event from different parts of the world, whether students, practitioners or part of academia.

The Honorable Guest underlined the importance of democracy as a governing regime in Western societies. Inspired by Sir Wiston Churcill’s words for which “Democracy is the worst form of government, except for all the others”, Sir Hayes argued in favor of such regime type even though recognizing the intrinsic fragility and instability that characterize it. Among all, the Covid pandemic challenged democracies’ capacity to deal with the emergence,as leaders feared the risk to create a precedent through which undermining individual liberties and constitutional rights.

Sir Hayes also warned against underestimating the effect of those that believe different points of views should not be respected. He argues that democracy might be undermined from the inside indeed by means of this practice. Given the absolute lack of standards and control for engagement, social media have a dramatic effect on this regard. In Hayes’ opinion they amplified the wide spreading conflict mentality that typifies public opinion nowadays, narrowing down genuine confrontation and discussion for the sake of an exclusive individualistic mentality.

Also, Sir Hayes underlined the issues concerning the developments democratic regimes experienced since the early ‘80s in terms of liberal bias. The rising of the administrative bureaucratic power and the unprecedented strengthening of the judiciary, specific consequence of the European economic integration, contributed to the progressive social disengagement in the political scene. Furthermore, he argued that the social liberal èlite monopolized the public agenda by taking advantage of the neo-liberal bias of the European integration process and recognise destabilizing occurrences such as the Brexit referendum outcome as a direct consequence of the popular attempt to regain power within the democratic context.

During the Q&A session, a frank exchange of views between Sir Hayes and the participants contributed to the successful outcome of this event. Participants were able to learn more about contemporary democratic processes and the challenges that democracy is facing nowadays.

*If you weren’t able to attend the online event, you may watch the recording of Rt Hon Sir John Hayes MP’s speech here.