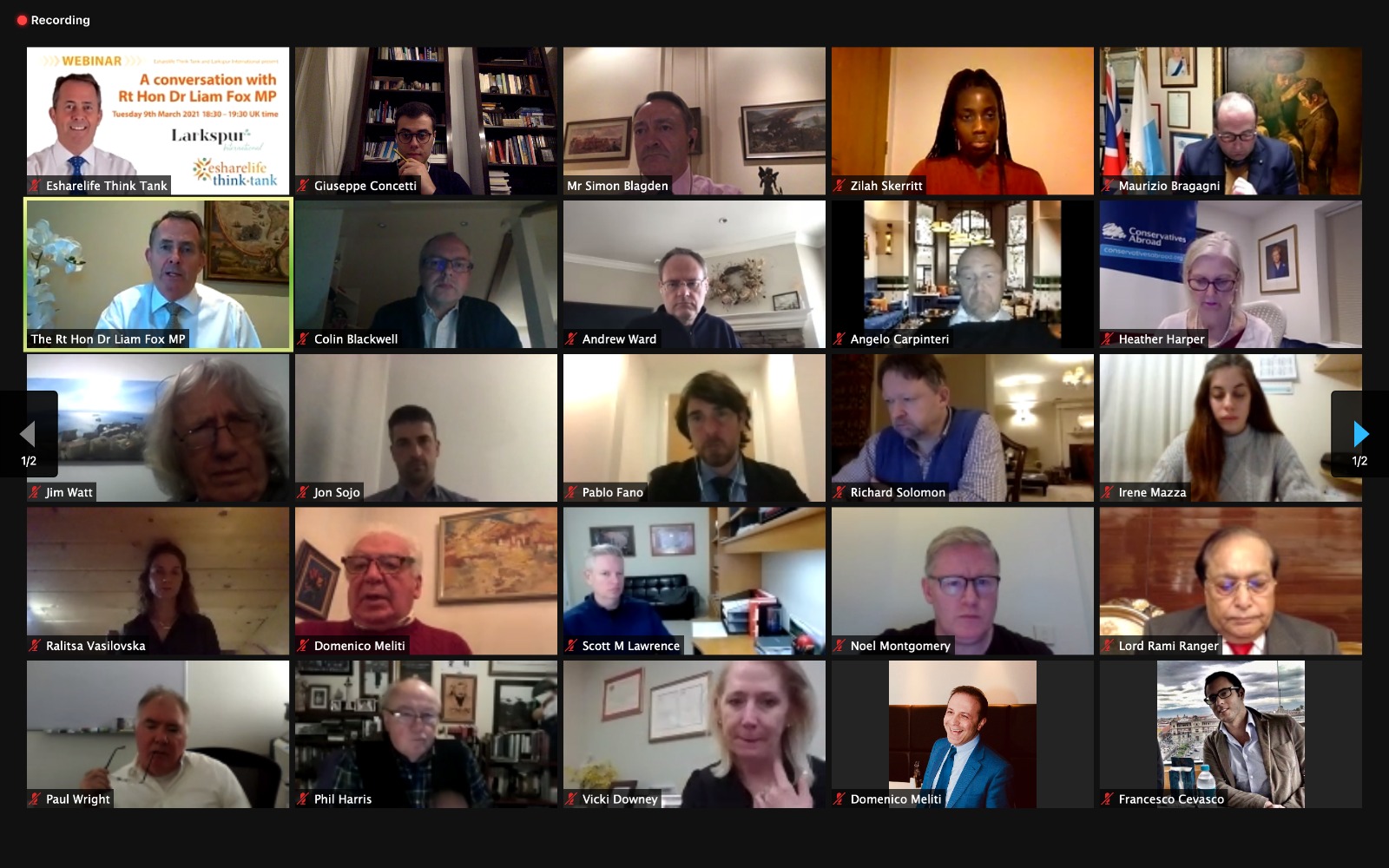 On Tuesday 9th March 2021, Esharelife Think Tank, in collaboration with Larkspur International and San Marino Think Tank, co-hosted a virtual conversation with the Rt Hon Dr Liam Fox MP, one of the most influential and insightful politicians of our time.

The Rt Hon Dr Liam Fox MP, former Secretary of State for International Trade with a long political career within the UK government, participated as Keynote Speaker of the event. The Honorary Consul, Dr Maurizio Bragagni, and Mr Simon Blagden, both moderators of the event, welcomed Dr Fox and several guests who joined the event from different parts of the world, whether politicians, CEOs or part of academia.

The Honorable Guest started the conversation by providing his views on both the UK and international economy in a post-Covid era. While broadly welcoming the budget debate, Dr Fox recognized the unprecedentedly difficult time we are now facing. He stated the importance of restrictions on the economy to face this external issue and the urgency to tackle some UK underlying issues.

Dr Fox also mentioned global trade, which, as he reminded, started to contract even before the pandemic. To boost global trade, he then continued, several issues need to be tackled, such as trade tensions between some major countries that need to be resolved and the rise of protectionism, a gradually increasing problem in the last decade.

Finally, Dr Fox warned the audience about the Union’s issue, particularly the Scottish and Northern Irish ones. He valued the Union hugely and underlined that the UK had benefited enormously from it.

During a lively Q&A session, a frank exchange of views between Dr Fox and the participants contributed to the successful outcome of this event. Participants were able to learn from Dr Fox’s vast expertise dealing with the government and global issues, as well as to get an insight into the extraordinary efforts of the UK government to serve the best interests of its citizens, to build better and in a sustainable way our future and to maintain its reputation worldwide.

Dr Fox has again proved himself a brilliant and open person, and participants were able to learn from his vast expertise, fascinating insights and extended knowledge on every aspect of the UK government policies, both in a post-Brexit era and a post-Covid world.