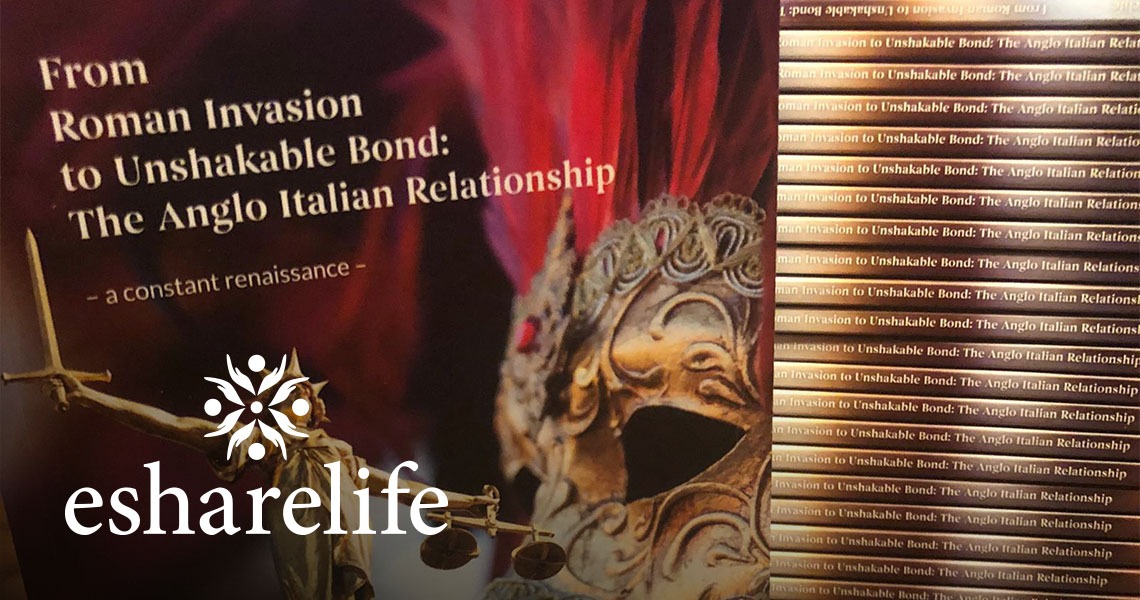 “Italy is a country whose history, arts, language and cuisine are all held by Britons in the highest

regard and with the greatest affection. Maurizio embodies that warmth, depth of affection and

commitment that the two countries feel for each other.”

The book is available HERE in Kindle and Paperback versions.

Dr Bragagni’s latest book charts British history through the eyes of the Italians who have contributed to shaping the country we live in today.  Prepare to be surprised; their impact has been far-reaching across business, culture, exploration, innovation and politics.

It was prompted by the Brexit process and was finished as Covid 19 wrought its path across Europe.

In answer to ‘Why now?’ Dr Bragagni said that there had never been a better time to write of international bonds, their breakups and resolutions through history.  The purpose, he says, is to give people reassurance and hope; to show that what we have right now, we will survive, and survive it with a better society as a result of shared goals and largely unconditional support.  The lessons learned have been tough, but they have centred on the value of human life and respect for others.  The outcome, he hopes, will be more people playing a positive part in the recovery story.  The unshakable bonds of the past are a good place to look for reassurance about the future.

From Roman Invasion to Unshakable Bond: The Anglo Italian Relationship – a constant renaissance, is Dr Maurizio Bragagni’s third book.  It retraces Britain’s relationship with Italy from the Romans arriving and establishing roads, towns and cities (including London, Leicester and York) to the impact of the Italian Renaissance and the rise of the British aristocracy’s ‘Grand Tour’ rite of passage (and ‘rounding’ of education) in the 17th century.

Italians were the world’s first bankers.  Their impact on British soil was significant and today the United Kingdom is one of the world’s leading financial centres.  Thomas Cromwell befriended the banker Francesco Frescobaldi in Florence, and Geoffrey Chaucer travelled to Italy on three occasions to negotiate trade agreements between both countries.

Italian traders brought more than silks and luxury goods to Britain, they were able to open dialogue with other nations, offering introductions to those of power and influence.

Italy has retained this special place within the heart of its island cousin.  Dr Bragagni, who is CEO of the £multi million global technical cable innovator Tratos and Hon Consul to San Marino, experienced the strength of the bond in action during the first wave of the Covid-19 Pandemic when senior British politicians stepped up to help the Republic combat its raging infection rates.  In his role as Honorary Consul, Dr Bragagni follows in the footsteps of one of Britain’s Italian ‘greats’, Lord Charles Forte – who has a well-deserved section within the book.

It is those individuals who have made their unique contribution, rather than the two countries’ bond, that is the focus of this book.  It is the Italians, and those of Italian descent, who chose to live in, and love, Britain who are celebrated here.  It is a fascinating glimpse of the level of influence these adopted Britons’ exerted, changing law, culture, habits and even helping to better living conditions to the cities’ poorest and most disadvantaged.

Dr Bragagni’s books are published by www.esharelife.org, selling through Amazon and Kindle, with all proceeds going to the Esharelife Foundation which raises money to fund education and vocational skills training for children and young people – with a particular focus on access to education for women and girls often denied it – in some of the most deprived areas of Africa.

“This welcome account adds to the wealth of material of the enormous contributions which Italians have made to Britain.”

“A fascinating and compelling insight into the roots of the British Italian relationship.”

“This is a wonderful book authored by two great enthusiasts, sharing their passion and pizzazz for their own culture and its contribution to the UK, Italy and the world. It is a must buy and be read book and funds from its sale will be used to support a campaign, cause and the vulnerable in Africa.”

Other books from Dr Bragagni on Amazon and Kindle and published by Esharelife.org include: