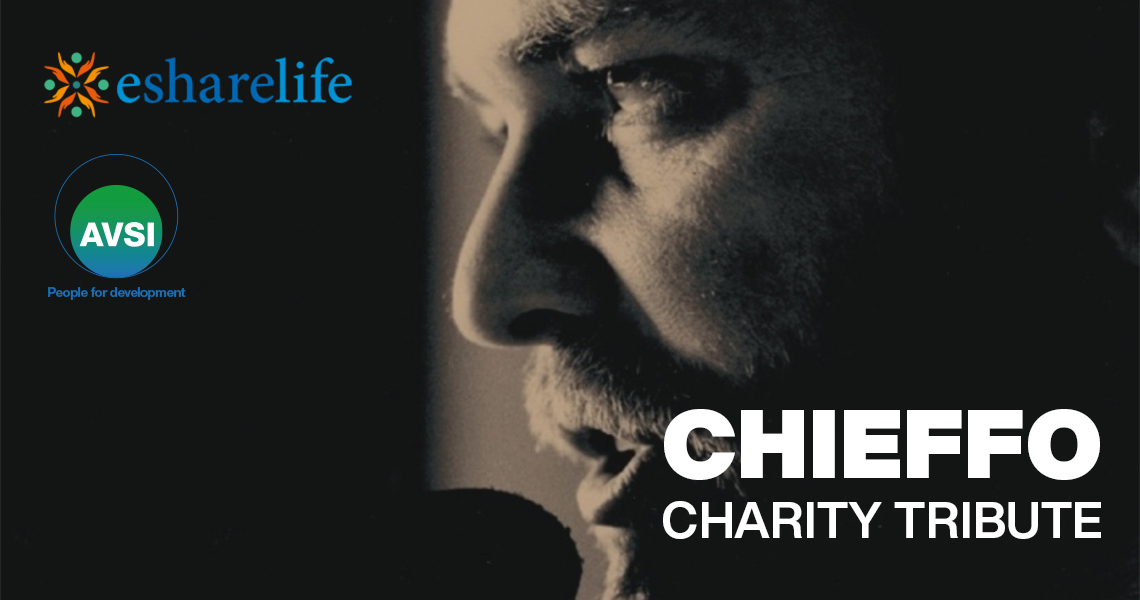 Esharelife Foundation is now taking part in a great new initiative to support those who need it most.

For this new exciting project, Esharelife is collaborating with the Claudio Chieffo Association in order to raise money for AVSI, a charity that Esharelife has been working with since its foundation.

Born in Forlì (Italy) in 1945  Claudio Chieffo is a famous Italian singer-songwriter. He wrote and sang songs for more than 50 years starting from the ‘60s. Claudio Chieffo was one of the most original authors and voices in Italy whose songs were sung by thousands of people
READ MORE…

To keep alive and keep spreading around the world the beautiful music of Claudio, his son, Benedetto Chieffo, has founded the Claudio Chieffo association. Moreover, by being surrounded by songs, music and guitar, Benedetto, after the death of his father in 2007,  started singing his father’s songs in public. In 2014 he recorded a new album with some unpublished songs of his dad and he also filmed a movie to spread and promote his father’s works.

Benedetto has already collaborated with Esharelife multiple times, he sang for Esharelife in support of Beirut, after the explosion happened on the 4th of August 2020. He also took part in the Esharelife Christmas Concert in December 2020.

One of the latest projects that Benedetto has been working on is an album that contains a collection of songs written by his father Claudio and sung and interpreted  by numerous artists including himself.

The album attempts not only to spread the beautiful, profound, and meaningful music of Claudio Chieffo but it is also aimed at providing help and support to those who need it most.

Indeed, all the proceeds  from the  album will be donated to AVSI to support the incredible job that this charitable association does everyday around the world to sustain children and communities in the most disadvantaged areas of the world.

This is a great opportunity to come into contact with incredible artists that have decided to dedicate their time to sing songs that reflect the values of Christianity, love, family, and friendship. You can pre-book the album in advance by making a donation by clicking on the button below.

Buy your Album below

Esharelife would like to thank all the artists and all the people that have collaborated on this amazing project by dedicating their free time to build something that will support families and communities all over the world to have a better and brighter future. A special thank also to Francesco Guccini, a famous Italian singsong-writer who, despite being unable to be featured in the album, contributed to the project with a donation.

This website uses cookies to improve your experience while you navigate through the website. Out of these, the cookies that are categorized as necessary are stored on your browser as they are essential for the working of basic functionalities of the website. We also use third-party cookies that help us analyze and understand how you use this website. These cookies will be stored in your browser only with your consent. You also have the option to opt-out of these cookies. But opting out of some of these cookies may affect your browsing experience.
Necessary Always Enabled

Any cookies that may not be particularly necessary for the website to function and is used specifically to collect user personal data via analytics, ads, other embedded contents are termed as non-necessary cookies. It is mandatory to procure user consent prior to running these cookies on your website.